Dolphin Technologies has analyzed the behavior of 40,000 drivers over a period of two years to investigate the causes of traffic accidents. One result is particularly interesting: 25 percent of all accidents happen within the first three minutes of driving.

The Austrian telematics provider Dolphin Technologies specializes in leveraging technology to prevent road traffic accidents. Drivers who use Dolphin’s system receive incentives, such as a discount on their insurance premium, for engaging in low-risk driving behavior like not using a phone while driving, and respecting speed limits.

“A self-induced accident is often the result of wrong decisions or lack of information,” says Harald Trautsch, CEO of Dolphin. “One drives tired, drunk, or uses the phone at the wheel. Or one doesn’t know that extreme weather conditions such as black ice prevail on the route”.

In a recent study based on anonymized data obtained through Dolphin’s system, the telematics provider analyzed 3.2 million car trips by 40,000 people in 2018 and 2019, in which a total of 1,986 accidents occurred. In particular, the study examined the duration and correlation between the length of car journeys and the probability of an accident. 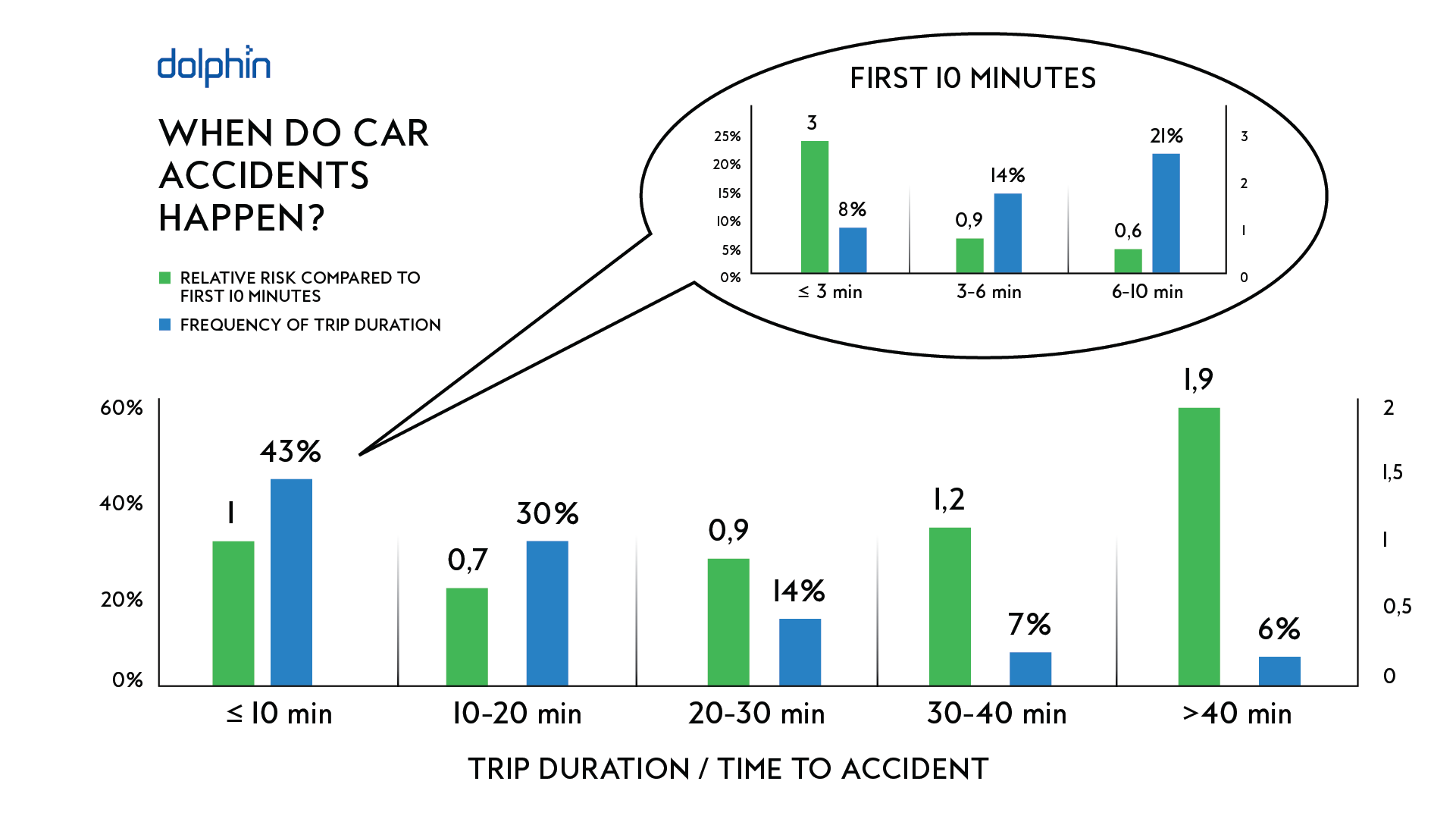 The data revealed that most trips (87%) last less than 30 minutes while only 1% of all trips last longer than one hour. The lowest risk of accident in relative terms was for trips lasting between 10 and 20 minutes. After that, the risk rises disproportionately. If you are in the car for more than 40 minutes, you already have two and a half times the risk than if you are driving for less than 20 minutes.

However, a closer look at short trips – here defined as trips lasting less than 10 minutes – revealed some very interesting details. Notably, 25 percent of all accidents occurred during the first 3 minutes of driving, and another 14 percent within the first 6 minutes. “This study shows that if we could encourage people to give up their cars for short distances, up to 40 percent of all accidents could be avoided,” says Katharina Sallinger, Chief Data Scientist at Dolphin and head of the study. “We want to support people in being on the road safely. Knowing which behavior leads to accidents enables us to make targeted recommendations, and thus to minimize risks”.

● Avoid short trips if possible and cycle or walk
● For longer journeys, plan and keep regular breaks
● Do not use your cell phone while driving. It causes 26 percent of accidents